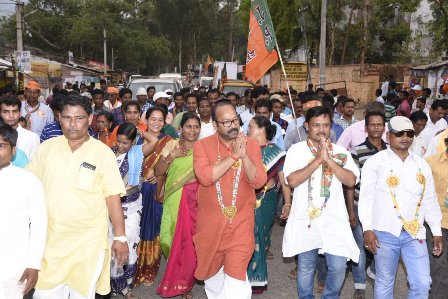 NF Bureau: BJP Candidate Bhrugu Baxipatra has emerged stronger in the last few days with whirlwind tour of all assembly segments and getting overwhelming response. BJP had finished a poor third in Berhampur Lok Sabha seat in 2014. However, Bhrugu has managed to give a tough fight to senior leader and former Union Minister Chandrasekhar Sahu, who was imported by the BJD from Congress a few months ago.

Since sitting MP Siddhant Mohapatra (BJD) failed to do anything for Berhampur in the last 10 years and Chandrasekhar Sahoo did little as a Congress MP prior to that period despite being an Union Minister, there is an anti-incumbency against the BJD in Berhampur Lok Sabha Constituency.

Bhrugu Baxipatra has been campaigning hard in Gopalpur, Berhampur, Chhatrapur, Digapahandi, Paralakhemundi and Mohana. His social media initiatives have drawing good response on Facebook, Twitter and WhatsApp. He is striking a chord with the people in an effective manner whether on Social Media or in the ground.

BJD’s decision to deny ticket to K Narayan Rao from Paralakhemundi in favour of little known Kalyani Gajapathi, may prove very costly for the party. Rao has strengthened the BJP to a great extent and is well ahead of BJD and Congress now. BJP is strong in Mohana Constituency, while in Digapahandi, Pinky Pradhan has an uphill task against BJD stalwart Surjya Narayan Patro, but doing her best to surprise the poll pundits.

Bibhuti Jena is giving a tough fight to Pradeep Panigrahi in Gopalpur. There is a fight in Chhatrapur too. In most constituencies, people are rooting for PM Modi.In Berhampur and Chikiti too, BJP is gaining fast and catching up with the BJD.

People are ready to vote for the Lok Sabha Candidates as well as Assembly Candidates because of Modi. However, BJD strategists are aware of this fact and will leave no stones unturned to counter that wave. It would be interesting to see how BJP maintains the momentum in the coming few days.

👉 Ganjam Dist worst-hit by the Scam

👉 Who is responsible for the water woes in entire Ganjam District?

👉 Why no steps were taken in the last 20 years to ensure clean drinking water to people?

Will send Chit Fund looters to jail if voted to power: Dharmendra