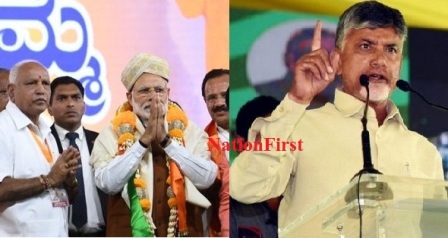 NF Bureau: Andhra Pradesh Chief Minister N Chandrababu Naidu, who had dumped the BJP last year and has been aggressively working to see ouster of Narendra Modi from power, fell into a trap on Sunday when he resorted to unprecedented personal attack against the PM.

Modi not only slammed Nara Lokesh, but also launched a scathing attack on Naidu, calling him a betrayer of allies. The PM also accused Chandrababu Naidu of backstabbing his Father-in-Law, NT Rama Rao.

These attacks left Naidu rattled and he resorted to personal attack against PM Modi, by talking about the PM’s estranged wife. He also took the lady’s name in public and questioned Modi’s marital status. “You don’t have a family. So, you don’t know about family values. I do care for my family”, Naidu retorted while landing in the trap laid by PM Modi.

It won’t be a surprise if Modi uses it effectively to play the ‘victim card’ while the election battle has heated up across the country.

Integrity Clause may not be required in G2G Deals