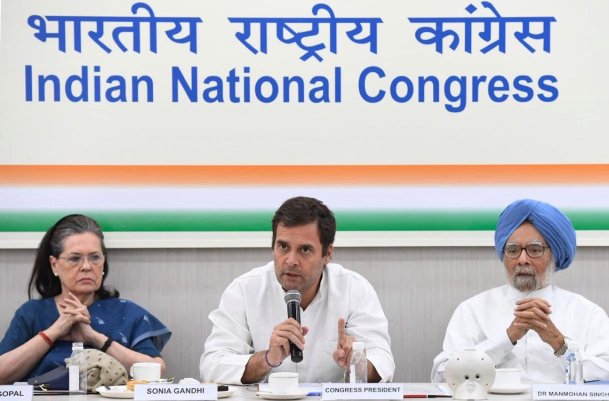 Nation First News:  As expected, the grand old party of India, which ruled the country for almost six decades, has decided to give a thumbs down to the people’s sentiments and refused to learn from its mistakes. The party has failed to gauge the public mood despite losing the Leader of Opposition status in Lok Sabha for the second consecutive election in a row. In 2014, they finished at 44 and five years later, they could take it to 52.

Instead of taking corrective measures, the party is busy taking retrograde steps. The public perception is built against Rahul Gandhi and his family. People of India have refused to accept the dynasty politics of the Gandhis. But, by rejecting Rahul Gandhi’s resignation as party president and denying this post to a non-Gandhi leader, the Congress has erred again. Can Congress pose a challenge to BJP and Modi-Shah duo with Rahul Gandhi at the helm?

Some political pundits believe that Congress does not want to dump the Gandhi family as it knows it would lead to the disintegration of the party. Senior Congress leaders believe that the BJP would fall on its own someday when it fails to fulfill the aspirations of the people. But, the Congress should stay intact till then to project itself as an alternative. If Congress collapses and splits without the Gandhis, then there would be nothing left, they say.