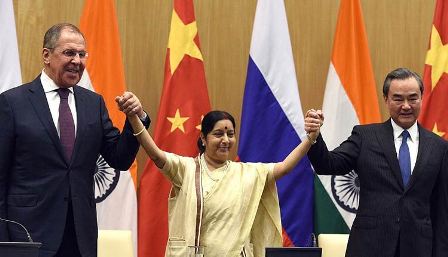 NF Bureau: While getting ready for a big onslaught on terror in Pakistani soil, India has stepped up massive diplomatic pressure on Pakistan, in a bid to isolate it globally further. In a significant development, the United States, Britain and France have proposed that the UNSC blacklist Maulana Masood Azhar, head of Pakistan-based terror outfit Jaish-e-Mohammad (JeM).

The above countries have sought to subject Maulana Masood Azhar to arms embargo, global travel ban and asset freeze.

This development came soon after another key diplomatic achievement by India in China when the Joint Communique of 16th Meeting of Foreign Ministers of India, Russia & China (RIC) strongly condemned terrorism in all its forms & manifestations and stressed that those committing, orchestrating, inciting or supporting terrorist acts must be held accountable and brought to justice in accordance with existing international commitments.

Meanwhile, External Affairs Minister Sushma Swaraj is leaving for UAE today to take part in Organisation of Islamic Cooperation (OIC) meeting in Abu Dhabi as the Guest of Honor. This is the first time OIC has given such a special honour to India, forcing Pakistan to stay away from the meet. This is seen as a big development, as OIC always had a soft corner towards Pakistan till a few years ago.

According to latest reports, NSA Ajit Doval and US Secretary of State Mike Pompeo had a telephonic conversation late last night where the US supported India’s decision to take action against JeM terror camps on Pakistani soil.