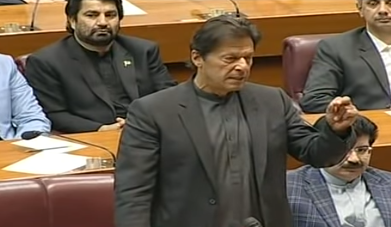 NF Bureau: Many Senior Journalists, Liberals as well as Politicians from various parties have hailed Pakistan PM Imran Khan as a ‘Statesman’, ‘Peace Loving Person, ‘Matured Politician” etc. Some of them even started drawing comparison between him and PM Modi and openly endorsed him as a better leader. The above appreciation is related to Imran’s decision to release Wing Commander Abhinandan Varthaman, who was arrested by Pakistan Army after ejection from the downed MiG 21.

They, however, ignored some of the content of Imran Khan’s speech at the Pakistan Parliament. Imran Khan did not condemn the Pulwama terror attack. He just said India provided the dossier yesterday only, which reached Pakistan today.

While trying to become a Terror Apologist, Imran sought to justify the suicide attack when he said,

“I am asking people of India, instead of pointing fingers at Pakistan without any evidence, why should not they try to figure out why a 19-year-old (Adil Ahmad Dar) would make himself a ‘human bomb’ and blow himself up and what caused him to carry such an act. Was not it because of Indian oppression in Kashmir”?

Imran Khan cited the example of LTTE Tigers in Sri Lanka to say even Hindus were involved in suicide attacks, but not because of their religion, but out of frustration and despair. He also talked about “atrocities in Kashmir” by Indian Forces and blamed the incumbent government in India for the crisis.

When such a responsible person says ‘suicide attacks’ are committed because of frustration and despair and does not term those as ‘wrong’ and ‘crime against humanity’, we should not expect more from him on the issue of terrorism, which is the real problem today.

The tensions between India and Pakistan are not due to arrest of Abhinandan. The key issue remains terrorism and Pakistan’s support to terror activities against India from its soil. When he tries his best to justify a dastardly suicide attack, we know well what’s going to happen next.