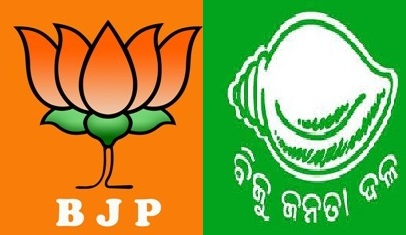 NF Bureau: Two politicians from rival parties let down the people of Odisha in the last few days. And, both the incidents were related to Pulwama terror attack, which claimed the lives of 40 CRPF Jawans, including two from Odisha. If BJD MLA Debashish Samantaray drew flak for forgetting the human values, BJP leader Lekhashree Samantsinghar was accused of forgetting the basic courtesy.

Fans and followers of both parties may try to put up volt face in public, as they have been doing and pretend that their leaders did no wrong, but they know the truth better than us.

What Debashish Samantaray did, was unpardonable. He not only manhandled the martyr Manoj Behera’s relative, but also made an irresponsible statement while tendering apology. Twitter outrage forced the entire party to go into a huddle and Debashish apologised. But, he showed arrogance by saying “he was not aware of the person’s identity”. He also termed him a “distant relative”. Did he mean to say he had the license to behave rudely with all other people? Had the person not been the martyr’s relative, would not Debashish apologise?

The above questions would haunt Debashish for long. It would also make a dent in the image of BJD, its Supremo and the Spokespersons who were defending the indefensible.

At the same time, can we take Lekhashree’s statement lightly? Time and again, she has been using the language against rival leaders, which are far from decent. She mocks, taunts, takes a dig at BJD rivals, including the Chief Minister in an undignified manner. Look at leaders like Suresh Pujari, Bhrugu Baxipatra, Aparajita Sarangi and their tweets and statements. Can’t we see the difference? Lekha is found crossing the line too often unlike other leaders in the party.

Calling an elected Chief Minister (who has been in office for four times) “anti-national” or “desh drohi”, she did no justice to her stature as well as that of the party. Naveen Patnaik can be criticised, slammed and trolled. Everyone has a right to ask questions. He can be taken to task on many schemes, policies etc. In politics, there are rivals, not enemies. But, even die hard supporters did not take Lekha’s statement lightly and agreed that it was in very bad taste and could have been avoided.

We are going to witness a heated battle and dirty mud-slinging match in the run up to 2019 general election, which is also clubbed with the assembly polls in Odisha. It would be futile to expect decency and courtesy as well human values from our political leaders. Let’s wait and watch whether they would continue to stoop to new low as the political battle intensifies in the coming weeks or restrain themselves. The former looks more likely.