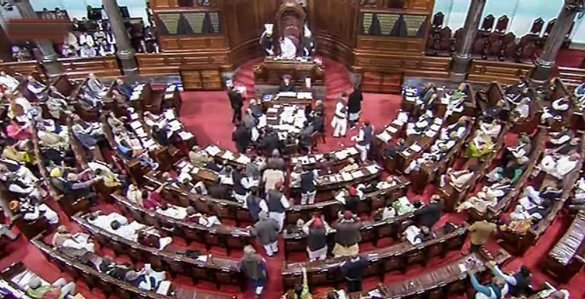 Nation First News:  Four Rajya Sabha seats are up for grabs in Odisha, after the victory of 4 MPs in the recently concluded Lok Sabha & Aseembly polls. The BJD had fielded 6 Rajya Sabha Candidates while 4 of them emerged victorious. While Dr. Achyuta Samanta and Anubhav Mohanty won Lok Sabha polls, Pratap Deb & Soumya Ranjan Patnaik got elected to Odisha Assembly.

Only Prasanna Acharya & Sarojini Hembram lost the polls. So, they would continue in Rajya Sabha. If we recall, Naveen Patnaik had promised Rajya Sabha seats to Prasanna Patasani & Ramesh Chandra Chyau Patnaik. If they get the final nod, there will be hectic activities for the remaining seats.

BJD can easily win 3 out of 4 seats, thanks to its strength in the Assembly. Naveen may spring surprise by choosing a consensual candidate for the fourth seat. Among others, Arup Patnaik who lost the Bhubaneswar Lok Sabha seat and BJD IT Cell Head Amar Patnaik, are the likely candidates for Rajya Sabha.