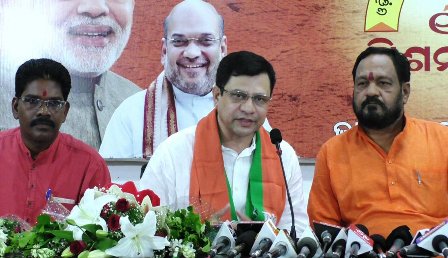 Nation First News: With three Rajya Sabha seats in Odisha going to bypolls and BJD having strength of 112 MLAs in 146-member House, the party’s victory in all 3 seats was a foregone conclusion. There was nothing for BJP in the bypolls. While everyone was waiting for Naveen Patnaik to announce the candidates for Rajya Sabha polls, it was BJP India’s official Twitter handle that announced candidature of Ashwini Vaishnaw for Rajya Sabha polls in Odisha.

While the surprised State BJP leaders in Odisha were yet to react, BJD supremo Naveen Patnaik held a press meet 15 minutes later and announced 3 candidates for Rajya Sabha polls, including Ashwini Vaishnaw. Confusion prevailed. People were in shock. However, Naveen had to return to give another press byte to end the confusion, saying Ashwini is BJP’s candidate, but BJD supports him.

The announcement stunned both BJP and BJD workers as well as leaders, who were fighting a bitter political battle just two months ago. Political Pundits say foundation has been laid for a BJP-BJD alliance and Ashwini Vaishnaw will be a bridge to achieve this. The recent developments have left no doubts in one’s mind that both parties are in a virtual alliance and may make it official sooner than later.

In BJD, it’s Naveen and his Team that rule the roost. There won’t be confusion; any rebellion. Whatever Naveen says, will be accepted and regarded. But, it may not be the case with Odisha BJP leaders even if they try to put up a volt face. The congratulatory message did not come from the top leaders. When the joining program was held today in Bhubaneswar, it was kept as a low-key affair. The Social Media LIVE was delayed by more than an hour – a rare deviation. Barring senior leaders such as Basant Panda and Samir Mohanty, others such as Dharmendra Pradhan, Baijayant Panda, Pratap Sarangi, KV Singh Deo, Dr. Damodar Rout, Prakash Mishra and Kharabela Swain were conspicuous by their absence during such a big event.

Also Read:
All You Want to Know about Ashwini Vaishnaw

Dharmendra Pradhan had retweeted the tweet of BJP India yesterday, which announced Ashwini Vaishnaw’s candidature, but no congratulatory message came from him till the time this article was being written. Pratap Sarangi’s Twitter handle remains silent till now. And, Baijayant Panda, who never stays behind when it comes to important tweets, has maintained a stoic silence. No tweets came from his Office too. Same response can be seen from senior leader KV Singh Deo and Jual Oram. Only Bhubaneswar MP Aparajita Sarangi tweeted, congratulating Ashwini as her ‘batch-mate’ and ‘friend’.

Many BJP supporters on Twitter seem to be dismissive of this new bonhomie between BJP and BJD. Many have directly or indirectly made their displeasure public. But, how long will it continue? Since neither the BJP leaders nor workers in Odisha can change things, they may be compelled to fall in line and accept it as a ‘political reality’.

As Dr. Arun Singh is arriving in Bhubaneswar this evening, he is expected to do some damage control and pacify the sulking leaders.

One man, who must be very unhappy and uncertain about his future today, is Bijoy Mohapatra. He will have a tough time in Patkura in the fast-changing scenario.

Be ready to tackle Cyclone, Flood and Drought: Naveen Patnaik