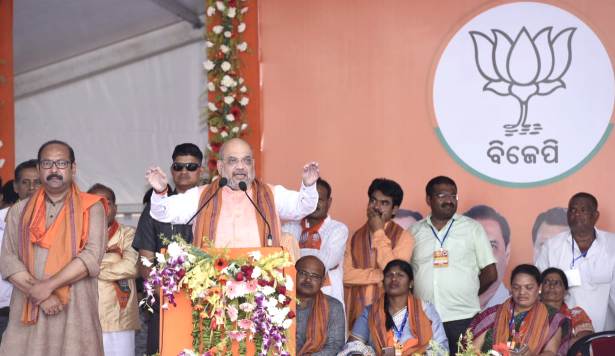 While hitting out at CM Naveen Patnaik and BJD Govt, Amit Shah asked people of the State to uproot the incumbent Govt and vote for the BJP. Odisha now needs a young Chief Minister who can fulfill the aspirations of people.

Amit Shah’s statement is seen as a hint that Union Minister Dharmendra Pradhan could be the CM if BJP comes to power in the State.

Addressing BJP’s Vijay Sankalp Samabesh, Amit Shah said, “Young people are migrating to other states like Surat in search of employment because not a single big industry has come up in Ganjam in the last 19 years.”

Addressing the public gathering Shah further said, “You have given 19 years to BJD. Give us 5 years and we will make Odisha the No. 1 State.”

Targeting BJD President and Chief Minister Patnaik, Shah said that “Odisha needs a ruler who can speak Odia and understand the problems of people of Odisha”.