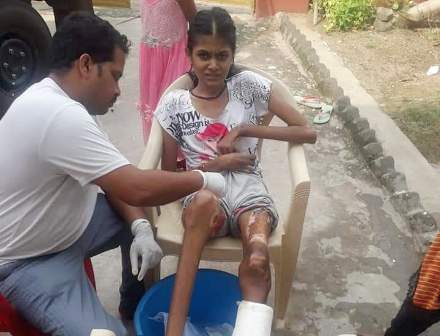 Nation First News: On the fateful day of July 19 2018, a speeding truck ran over a group of children who were returning from school near Rahanj in Bhadrak district. At least 5 students of Ranital High School were killed while 4 others got injured. The CM and Odisha Govt had assured all support to the injured.

11 months on, a tweet by Padmalochan Behera brought the reality into light. Sheetal Sahu, a survivor from the tragedy, who witnessed her sister Sweta breathing her last in the same accident, is on the verge of depression.

Sheetal is being treated privately. Her family is having a tough time to bear the medical expenses. They are awaiting government help.

As Padmalochan tweeted, Sheetal now wants to die, as she is getting frustrated while fighting the odds. After the tweet went viral, Bhadrak District Collector intervened and assured all support. He reportedly met the victim’s family and is making arrangements for cashless treatment of the girl under BSKY.