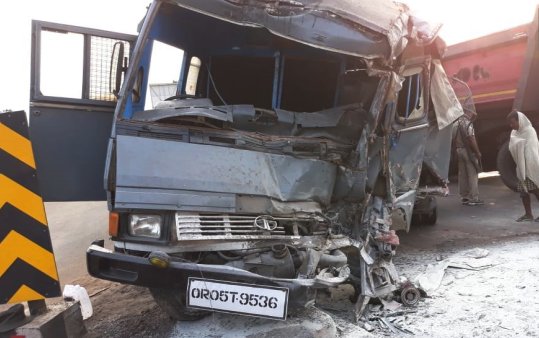 NF Bureau:   In a tragic incident, two police personnel were killed while 29 personnel were injured after a police bus collided head-on with a truck on NH-49 at Ganhichowk Brajrajnagar under Belpahar police limits in Jharsuguda today morning.

The OSAP cops of 2nd Batallion were identified as Prashant Behera and Shankar Prasad Pant.

The other injured jawans were being treated at Mandalia and TRL hospital and later shifted to VSS Institute of Medical Sciences and Research (VIMSAR) in Burla after their health condition deteriorated.

The cops were on their way to Banharpalli ahead of the Chief Minister’s programme today.

Expressing grief over the death of jawans, Chief Minister Naveen Patnaik announced ex-gratia Rs 5 lakh each & a Govt job to next of kin of deceased policemen. In case of serious injuries which might lead to disability in future, ex gratia Rs1 lakh has been announced for the jawans.