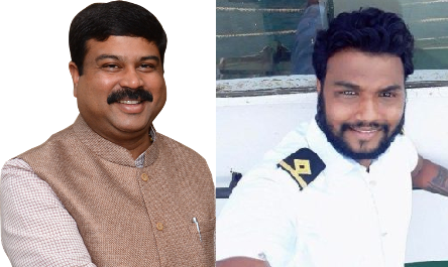 Nation First News:  A sailor from Odisha, Sudeep Chowdhary, along with four Indian seafarers who were kidnapped on April 19 this year in Nigeria by pirates has been released.

Minister for Petroleum and Natural Gas Dharmendra Pradhan had raised the issue with Ministry of External Affairs after a family of kidnapped sailor sought his help.

Pradhan wrote a letter to the External Affairs Ministry and requested EAM S Jaishankar for his personal intervention in this matter.

Following the release of five sailors, Pradhan thanked Jaishankar, Minister of State for Shipping Mansukh Mandaviya and all stakeholders for their efforts.

Earlier, former EAM Sushma Swaraj had asked the Indian High Commissioner to take up the issue and discuss with the Government of Nigeria for their release.

Thank EAM @DrSJaishankar ji, MoS Shipping Sh. @mansukhmandviya, @india_nigeria and all stakeholders for their efforts in securing the release of 5 Indian seafarers including that of Sh. Sudeep Chowdhary from Odisha who was amongst our citizens kidnapped by pirates in Nigeria.