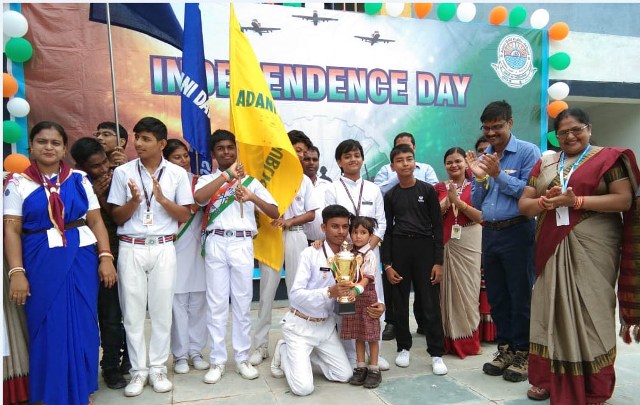 Nation First News:  The 73rd Independence Day has been celebrated at Adani DAV Public School in Kuamara in Mayurbhanj District.

Dhamra Port CSR Head Satya Ranjan Mishra graced the occasion as Chief Guest. He joined the flag-unfurling ceremony after the joint parade of the students. On this occasion he advised the students to be dutiful, disciplined and hard working along with involvement in Nation building.

Principal of the School Krishna Priya Sarangi also focused on freedom fighters and also advised the students that they should involve themselves in service to nation along with education. The patriotic song, drama and dance were performed by the students.

Teacher Himanshu Shekhar FatehSingh, Josabanta Sahu and Sanjukta Nahaka, Priyanka Priyadarshini and Nitu Bala were awarded by the Chief Guest for the successful implementation of Smart Class by Tata Age.

Kaveri House among the participated team in the joint parade has been awarded by the Chief Guest. Teacher Nitu Bala gave vote of thanks. School Physical Education Teacher Dipak Ranjan Moharana and others co-ordinated this programme. Rakhya Bandhan Programme was also performed by younger students.