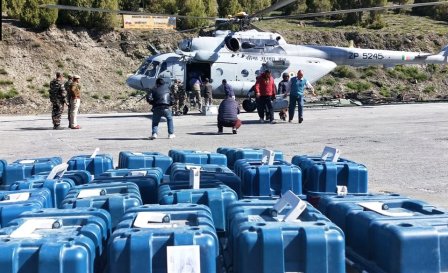 —-   No damage to the Neelachakra atop Jagannath temple in Puri: Archaeological Survey of India (ASI).

—-   A memorandum will be submitted to Centre by May end on Cyclone Fani damage assessment.

—-   Bhubaneswar: 2 live crude bombs recovered at the backside of a government quarter in Unit-9 area.

—-   Over 50 fall ill after eating food at marriage feast at Tingiriaguda and Keluguda villages in Koraput.

—-   External Affairs Minister Sushma Swaraj will be representing India in the meeting of Council of Foreign Ministers (CFM) of Shanghai Cooperation Organization to be held in Bishkek (Kyrgyz Republic) on 21 and 22 May.

—-   GOC-in-Chief Northern Command, Lt Gen Ranbir Singh: During this year we have been able to neutralize 86 terrorists so far & our operations continue in the same manner. Nearly 20 of them have been apprehended, we’ve also been able to bring back many of them to the mainstream.

Debate on possibility of split voting in Odisha