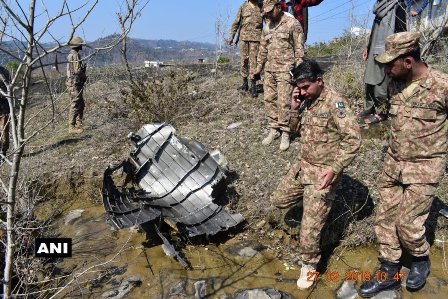 NF Bureau: While Pakistan remained silent on shooting down of its F-16 Fighter Jet by the IAF MiG 21 yesterday and maintained that it has shot down an IAF Jet, ANI has released first picture of the downed Pakistan F16 Fighter Jet in Pakistan Occupied Kashmir (PoK).

The same picture circulating on social media claims it to be an Indian MiG fighter. However, multiple IAF sources confirm this is the wreckage of Pakistani F16 downed yesterday, reports ANI.

Commanding Officer of Pakistan’s 7 Northern Light Infantry can be seen near the wreckage. The plane was shot down in Lam Valley in PoK. It is claimed that Wing Commander Abhinandan Varthaman had shot down the F-16 before losing his own MiG-21 in the skirmishes.