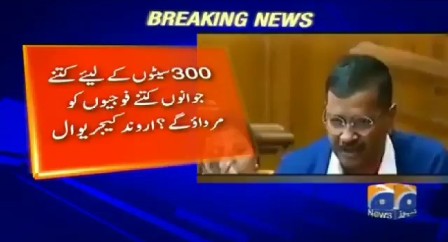 NF Bureau: The fiery and aggressive speech given by Delhi CM Arvind Kejriwal in the State Assembly, is being shown by Pakistani TV channels to claim that Indian Govt led by PM Narendra Modi had staged ‘Pulwama Terror Attack’ for electoral benefits.

Kejriwal had directly blamed the BJP for using Jawans to win 300 seats in elections. “You are leaving our Jawans to die. You are killing them on Border because of your political ambitions. How many more Jawans will be killed? How many families will be ruined? How many widows and orphans will you make? Shame on you and your politics”, Kejriwal said.

Kejriwal was more direct when he asked, “Did you stage the killing of our Jawans on border to win 300 seats in general elections”?

The Pak TV channels and Social Media handles are heavily sharing the video to prove their point that not Pakistan, but Indian Govt itself staged the entire incident to derive politic mileage.