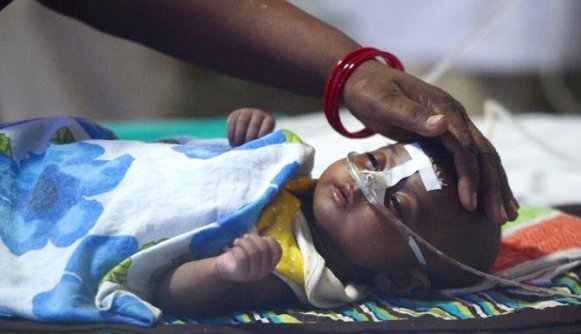 Nation First News:  The death toll of children due to suspected Acute Encephalitis Syndrome (AES) in Muzaffarpur of Bihar went up to 69 on Saturday.

Bihar’s Muzaffarpur district has been worst hit by the outbreak. While, 57 patients died at Shri Krishna Medical College and Hospital (SKMCH), 11 died in Kejriwal hospital.

Over 200 kids are being treated at various hospitals. Poorest of the poor are watching their children die.

District Magistrate of Muzaffarpur informed that for students till class eight, schools will remain closed till June 22.

Encephalitis is an inflammation (swelling and irritation) of the brain often due to infection. The infection may be bacterial or viral.

In some cases, encephalitis may be the result of an immune system disorder. It spreads by animal or insect bites or stings which causes mild flu-like symptoms such as high fever, convulsions and headaches.