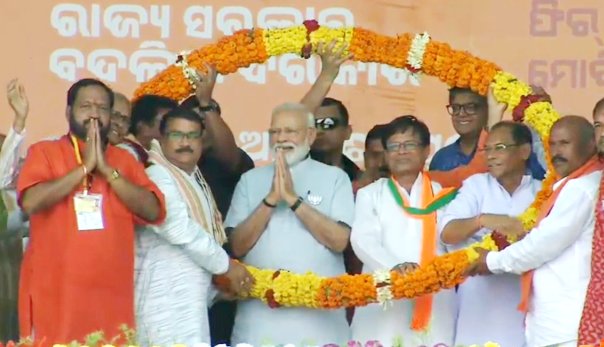 NF Bureau:  Prime Minister Narendra Modi on Tuesday addressed the Poll meeting at Bhawanipatna in Kalahandi district, his second visit to the State in less than a week.

Addressing BJP’s Vijay Sankalp Samabesh in Bhawanipatna Modi said, “Odisha will script history in 2019 in the same manner Uttar Pradesh & Tripura did in 2017 & 2018.”

Attacking the rival parties, PM Narendra Modi said parties like Congress and BJD conspired to keep the poor of the nation poor. They have betrayed them; as a result people have been forced to migrate to other states for livelihood.

Kalahandi is among the four Lok Sabha seats where the first phase of polling will be held on April 11.

Modi is slated to visit Odisha again to address an election meeting in Sundargarh on April 6.

• Without taking a single leave in last five years, I worked diligently to bring transformation in the country. It was possible because people supported me.
• If BJP had formed govt here, the work in Odisha would’ve been much faster, better and at a bigger scale.
• The credit for the transformation in the country goes to the people of the country.
• We identified 8 crore fake people who were availing subsidies and looting public money.
• The Congress and BJD conspired to keep the poor, poor. They have betrayed them. People have been forced to migrate to other states for livelihood.
• After 70 years of independence, for the first time electricity was provided to 3,000 villages in India.
• More than 400 Eklavaya model schools have been opened for the children of tribals.
• In the last five years, 8 lakh poor families have been given houses in Odisha.
• More than 24 lakh free electricity connections have been given.
• 40 lakh women have got Ujwala LPG connections.
• All of these things weren’t done by Modi, India’s voters are the ones who made it happen.