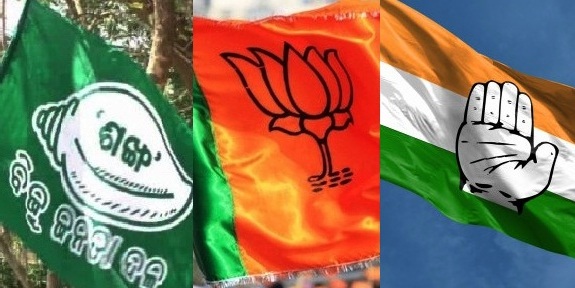 NF Bureau:  Two factors – ‘Modi Wave’ and poor candidate selections by BJD in Koraput & Kalahandi (which raised eyebrows) have boosted BJP’s prospects in the first phase Lok Sabha elections in Odisha. We may not give credit to anti-incumbency entirely, as the ruling BJD is still doing good in maximum number of assembly seats.

Whatever ground reports we have collected so far, BJP seems to have an edge in Koraput and Kalahandi. There is a neck-and-neck fight in Nabarangpur too between Congress, BJD and BJP. Surprisingly, BJP gained grounds in Berhampur, making it a close fight.

People have definitely voted separately for Lok Sabha and Assembly seats. Perhaps for the first time in Odisha, we may get different results for Assembly and Lok Sabha polls.

Koraput – Jayaram Pangi is on a strong wicket. Congress candidate Saptagiri Ulaka & BJD candidate Kaushalya Hikaka are giving him some fight. But, a victory is well within sight for BJP. There is a visible support for Narendra Modi on the ground and even BJD supporters admit that Pangi is winning, thanks to that wave.

Kalahandi – Basant Panda should be a happy man here. He was not in a position to win Nuapada Assemby seat this time, but now has strong chances to enter the Lok Sabha unless Bhakta Charan Das had marred his chances through effective poll management. BJD candidate Pushpendra Singhdeo has failed to impress the voters. It is believed that he was made a ‘scapegoat’.

Nabarangpur – Congress candidate Pradeep Majhi is holding the fort in this Parliamentary Constituency, while BJD candidate Ramesh Chandra Majhi & BJP candidate Balabhadra Majhi are giving him a tough fight. Balabhadra, who lacks mass appeal, is gaining, thanks to ‘Modi Wave’ in the region. Congress may still win here, albeit by a narrow margin. Ramesh Majhi has done his best to make it a tough triangular fight. The margin between all 3 candidates would be very less. Political pundits predict second place finish for Ramesh Chandra Majhi.

Berhampur – Everyone had given this seat to BJD, saying Chandrashekhar Sahu would sail through by a huge margin. However, BJP candidate Bhrugu Baxipatra did his best in the last 5-6 days to recover the lost ground. With ‘Modi Wave’ at play, the battle of Berhampur has become very tight and it could be anybody’s game. It won’t be a surprise if BJP causes a major upset here.

The ground report suggests that BJD may lose a few seats in the first phase, but not enough to give an upper hand to the Opposition. The party is holding an edge in 14-16 out of 28 seats. BJP and Congress may win 6-7 seats each, it’s believed. However, if the final calculation changes, BJD may win up 17-18 seats. BJP may win 7-8 seats and Congress may win 5-6 seats.

Rice, Dal & Salt at Re 1 under NFS Scheme in Odisha: Dharmendra