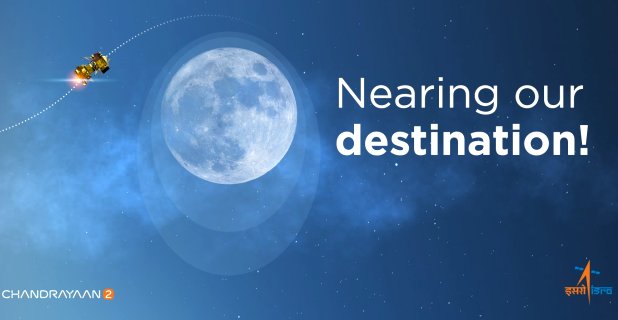 Nation First News:  ISRO’s Chandrayaan-2 was successfully inserted into a Lunar orbit today at 9.02 am.

Following this, a series of orbit maneuvers will be performed on Chandrayaan-2 spacecraft to enable it to enter its final orbit passing over the lunar poles at a distance of about 100 km from the Moon’s surface.

After this, the Vikram lander will separate from the Orbiter and enters into a 100 km X 30 km orbit around the Moon.  Then, it will perform a series of complex braking maneuvers to soft land in the South polar region of the Moon on September 7, 2019, said ISRO in its press statement.

The next Lunar bound orbit maneuver is scheduled tomorrow for August 21, 2019 between 1230-13:30 hrs IST. There will be four more orbit manoeuvres, which will take the nearly Rs 1,000 crore mission spacecraft into its final orbit of the Moon. This process of manoeuvering in the lunar orbit will be taking place from August 21 to September 1.

ISRO Chief K Sivan: #Chandrayaan2 mission crossed a major milestone today, the precise lunar orbit insertion maneuver was carried out at 9 am for about 30 minutes and Chandrayaan 2 was precisely inserted in the defined orbit. pic.twitter.com/uR9LhAux4u

Dharmendra thanks Piyush Goyal for keeping his Request