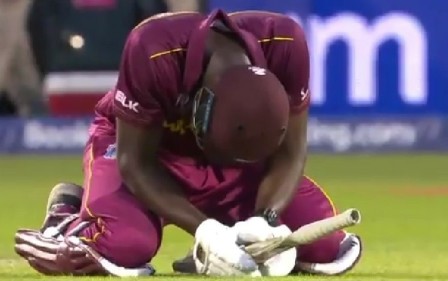 Nation First News: He was in tremendous form, batting on 101 off 81 balls. West Indies needed 6 runs from 7 balls to win against New Zealand. He attempted to hit Neesham for a Six, but the ball landed in Boult’s hands just near the boundary rope. He almost fell over the rope, but controlled in the last seconds.

Carlos Brathwaite was shattered, sat on the ground in a still position. Kiwis rushed in to console him. West Indies lost the match by 5 runs. With this, New Zealand virtually qualified for the Semifinals of CWC 2019, as they top the points table with 11 points from 6 matches followed by Australia (10), India (9) and England (8).

On the other hand, West Indies crashed out of the World Cup.