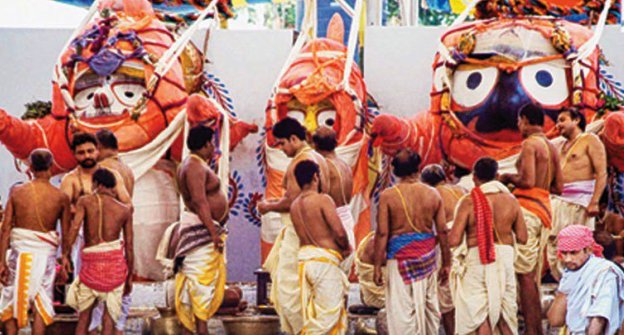 Nation First News:   Lakhs of devotees on Monday thronged Puri to witness the holy bath of the idols of Lord Jagannath, Lord Balabhadra and Devi Subhadra along with Sudarshan on Snana Mandap of the Srimandir in Puri on the sacred occasion of Deva Snana Purnima.

Through a ritualistic procession, early in the morning, the servitors escorted out the deities from the Ratna Simhasana. The Lords were taken to the bathing altar (Snana Mandap) early morning with a Pahandi procession.

As per rituals, the deities will be accorded a bath with 108 pitchers of aromatic water by servitors. After this ritual, the deities would be dressed up in elephant attire.

Later, the deities are supposed to fall ill (fever) and deities are kept on a special sick room called the ‘Ratna vedi’ inside the temple. They stay away from the public view for a period of 15 days. This period is known as ‘Anasara’. The deities will come out of the Anasar Ghar for Nabajouban Darshan, a day before Ratha Jatra.