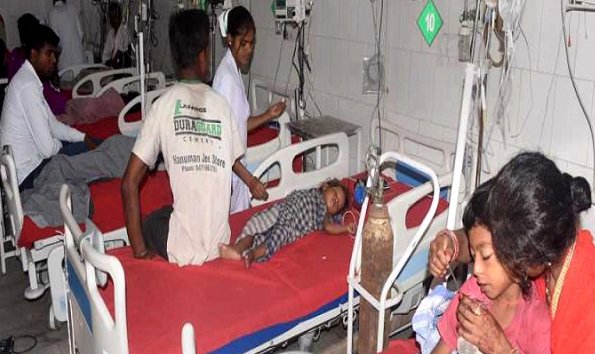 Nation First News:  The death toll due to the Acute Encephalitis Syndrome (AES) outbreak in Bihar has reached 100 on Monday.

Over 200 children were admitted to ICU of Shri Krishna Medical College and Hospital (SKMCH) reportedly.

Muzzafurpur district is worst affected by the outbreak as around 83 children have succumbed to Encephalitis at SKMCH.

Bihar Chief Minister Nitish Kumar had announced an ex gratia of Rs 4 lakh earlier each to families of the deceased. Health Minister Harsh Vardhan had also visited the state to take stock of the situation.

Though the Health Department, district administration and doctors are taking all necessary measures to fight the disease, the State government has looked clueless in checking the death toll and spread of Japanese encephalitis in this North Bihar district.