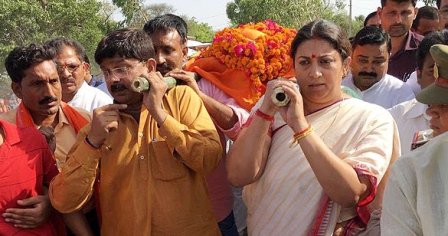 Nation First News: BJP leader Smriti Irani, who caused the biggest upset in 2019 General Elections by defeating Congress President and Gandhi scion Rahul Gandhi in his traditional seat Amethi, has stepped up the offensive against the killing of her close aide, a dedicated BJP worker Surendra Singh, who was shot dead by some unidentified miscreants on Sunday.

Smriti became a pallbearer of the funeral procession as she carried the bier on her shoulders for about 100 meters. She not only gave a clear message to her rivals as well as the killers, saying “I won’t spare the one who fired at Surendra Ji and the one who ordered it”, but also took a dig at her bete noire Rahul Gandhi for his congratulatory message.

An unsparing Smriti Irani stayed at the village till the last rites were performed. She consoled the bereaved family members and assured them that justice would be delivered. “I will make sure that the killers get death sentence,” she vowed.

She also urged the BJP workers to exercise restraint, saying the killing was an attempt to terrorise Amethi.