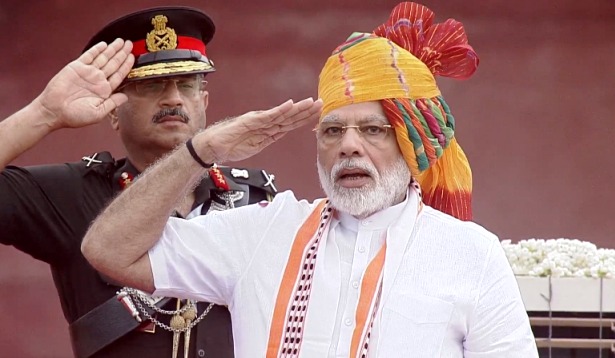 Prime Minister Narendra Modi unfurled the Tricolour at the Red Fort in New Delhi today at 7.30 am followed by the national anthem and a 21-cannon grand salute as a respect to the freedom fighters.

The security forces at the Red Fort and in Kashmir are put on a high alert.

PM Modi addressed the Nation. This was PM Modi’s 6th Independence Day speech. The Prime Minister made note of several developments in the 10 weeks it has been in power.

• Modi announces creation of Chief of Defence Staff. This was a recommendation by a committee after Kargil War in 1999. It took 20 years to implement.

• PM urges people to accord priority to ‘Made in India’ product

• Strongly fighting against those supporting terrorism

• More focus in on ease of doing business

• Govt abolished 1,450 laws that were of no use for the common people

• Dream of One Nation, One Constitution has finally been realise