India has been named the first-ever official 'country of honor' at the Marche du Film, the business equivalent of the Cannes Film Festival. 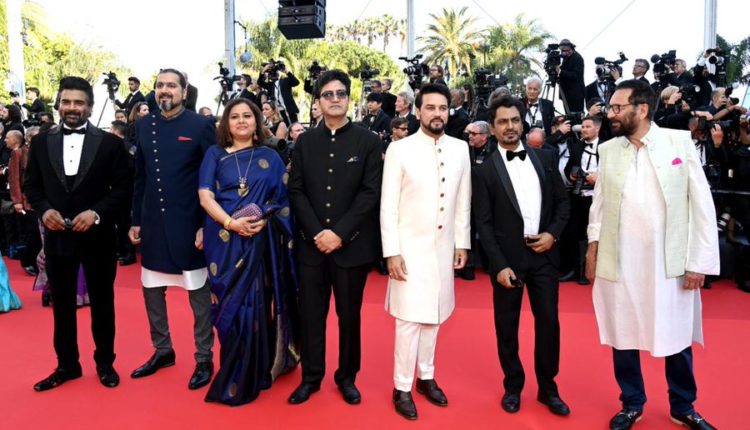 Nation First News: Dressed in all traditional, the 11 member Indian delegation led by I&B Minister Anurag Thakur walked the red carpet Tuesday at the opening of the Cannes Film Festival in France, where India is named as “country of honor” at the Marche du Film, the business equivalent of the marquee.

Mame Khan, the traditional Manganiyar singer from Rajasthan, was the first folk artist to debut the red carpet for the Indian contingent in Cannes.

R Madhavan, actor and producer who has worked in films in six different languages, and Telugu superstars Tamannah Bhatia and Pooja Hegde made their stunning appearances as part of the delegation.

Vani Tripathi Tikoo, actress and member of the Central Board of Film Certification, was also part of the Indian delegation to the festival, which is a special celebration of Indian cinema this year.

India has been named the first-ever official ‘country of honor’ at the Marche du Film, the business equivalent of the Cannes Film Festival. India is also a country of honor’ at Cannes Next, which gives five new start-ups the opportunity to present themselves to the audiovisual industry.

Ten professionals will participate in Animation Day Networking. Ambassadors from regional cinemas were part of the delegation and sent the signal to the Cannes to represent India’s 25 regional film industries that has many different tastes and styles when it comes to film production.

A major highlight of India’s participation in this edition of the Cannes Film Festival is the world premiere of the film Rocketry, produced by R. Madhavan, which will be screened on May 19th at the Palais des Festivals.