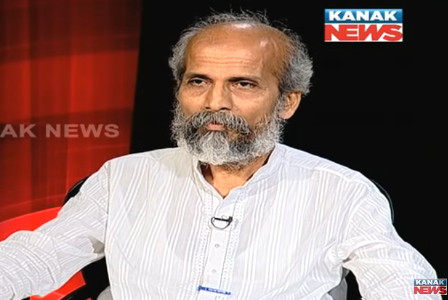 Nation First News: While Balasore MP and Union MoS Pratap Chandra Sarangi is being hailed as a ‘Karma Yogi’ and a ‘Man of Simplicity and Austerity’ across the nation, some people had raked up the brutal murder (1999) of Graham Staines and his minor kids, who were charred to death by a group of hooligans led by Dara Singh, who was allegedly linked to Bajrang Dal.

Pratap Sarangi was dragged into the controversy recently on the argument that he was leading the Bajrang Dal when the heinous crime took place. Neither the CBI nor the Court indicted Bajrang Dal for the crime. Even Dara Singh made it clear that he and his group committed the murder on their own to protect Hindu religion from the missionaries.

While the debate continues over Pratap Sarangi’s alleged links with Dara Singh, his 2017 interview with Kanak News has come to light. In that exclusive interview to Kanak News’ Chief Editor Manoranjan Mishra, Pratap Sarangi denounced the act committed by Dara Singh and condemned the brutal killing of Graham Staines and his sons.

“The path Dara Singh had chosen, was totally wrong. You can’t set people afire to protect the religion. There are other ways to fight. While the brutal murder of two minor boys cannot be justified under any circumstances, there was an option to take legal course of action against Graham Staines for his involvement in illegal conversion. The killing was absolutely condemnable,” he said.