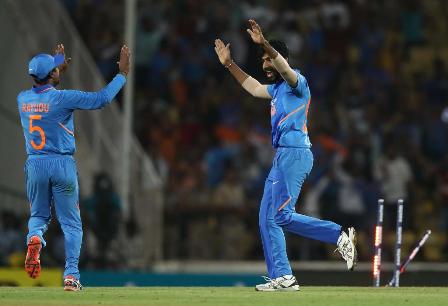 NF Bureau: Indian skipper Virat Kohli became the second cricketer after Sachin Tendulkar to score 40 hundreds in ODI, as India beat Australia by 8 runs in Nagpur ODI to take a 2-0 lead in the five-match series. It was Kohli’s 7th ODI hundred against Australia and 2nd in 2019. Tendulkar leads the ODI hundreds charts with 49 tons.

Earlier, Australia won the toss and opted to bowl first. They restricted India to 250 in 48.2 overs, but could not prevent Kohli from scoring 116 off 120 balls. Vijay Shankar made 46. For Australia, Pat Cummins took 4 wickets, while Adam Zampa took 2 wickets.

For India, Kuldeep Yadav took 3 wickets, while Bumrah and Shankar took 2 wickets each. Virat Kohli was declared ‘Player of the Match’.

It was also India’s 500th ODI victory. Only Australia (558) have achieved this record so far.