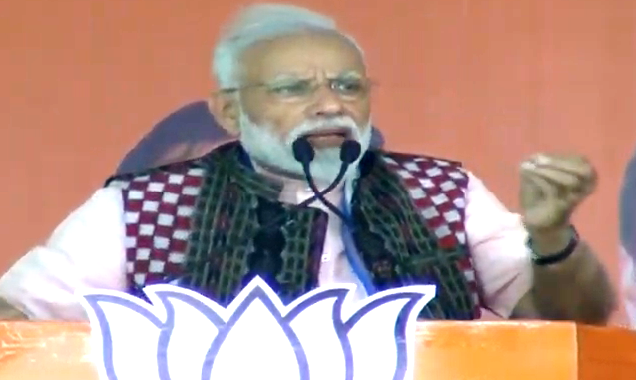 NF Bureau:  Addressing party’s Vijay Sankalp Sabha in Sambalpur, Prime Minister Narendra Modi today assured that if the Bharatiya Janata Party (BJP) is voted to power in Odisha, it will provide pucca house for every poor family in the State by 2022. The houses will have basic facilities like Ujjwala gas, electricity connections and toilet.

Attacking the BJD Government Modi alleged that despite having assets like River Mahanadi & Hirakud reservoir, farmers are dying for a single drop of water.

Modi also accused the Naveen Patnaik led Odisha Government of creating obstacles in providing benefits to the farmers in the state, said PM-KISAN has only been accessible to 8.5 lakh farmers in Odisha since State Govt has not sent complete list to Centre.

PM Modi today visited Sambalpur and later he will take part in a road show in Bhubaneswar as Star campaigner of BJP.

This is PM’s fifth election programme in the State.

Key Points:
• The Central Govt procures rice at Rs 19-30/kg and sends it to Odisha. Odisha Govt has to add only Rs 2/kg to it. However, they claim that they provide rice at subsidised rate to the people of Odisha. It’s an utter lie.
• Out of every Re 1 provided to the State by the Centre, 85 paise is being taken away by the middlemen. Only 15 paise is reaching the poor.
• We amended decade old mining law and ensured that a part of the fund from the resources extracted is utilized for the development of local infrastructure.
• Central fund is not being utilized properly in Odisha.
• In our country, the government has no lack of money. If something is lacking, it is lack of its proper use.