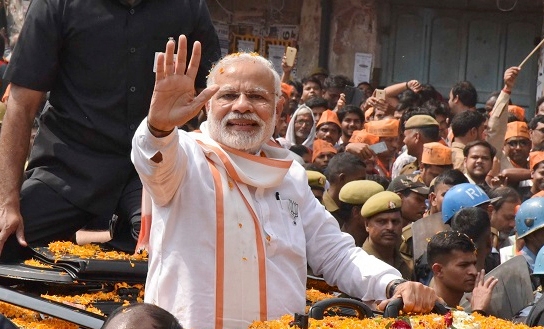 NFN Bureau:  The Modi Tsunami swept most parts of India, as BJP is all set to return to power with a comfortable majority on its own.

The Congress party has been reduced to 51 seats while the UPA is ahead of 91 seats.

In Uttar P BJP is leading in more than 55 seats. The Mahagathbandhan (SP+BSP+RLD) is leading in just 22 seats. Congress President Rahul Gandhi trailing in Amethi, but leading in Wayanad, Kerala.

PM Modi is heading towards a massive victory in Varanasi.

In Odisha also BJP gained good by leading in 7-8 sets.

The trends indicate that BJP has repeated its 2014 performance in an overall scenario beating the anti-incumbency.

It is seen as a big thumbs up to MP Narendra Modi’s leadership.

Naveen Patnaik all set for a 5th Term in Odisha