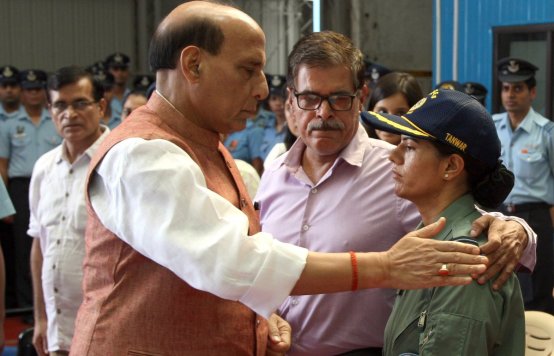 Nation First News:  We have seen families of Veer Jawans bidding tearful adieu to the Heroes when they get news of the tragedy. However, this is a rarest of rare instance when a Wife serving in the Forces kept watching while her husband met the misfortune.

It happened during the AN-32 Crash in Arunachal Pradesh on June 3. Flight Lieutenant Sandhya Tanwar was the Radar Operator at ATC in Jorhat airbase when the aircraft with 13 people on board took off from Jorhat 12.27 pm for the Menchuka advance landing ground in Arunachal, and its last contact with the ground control was at 1 pm.

She helplessly kept watching as the Flight carrying her husband Flight Lieutenant Ashish Tanwar, went off the radar. The crash was confirmed more than a week later.

On June 13, 2019, the Indian Air Force (IAF) has recovered AN-32 black box from the crash site and confirmed that there are no survivors in the crash of its An-32 Aircraft.

The bodies and mortal remains were recovered on June 13, 2019 by a ground team of Garud commandos and civilian porters who travelled to the crash site on foot.

Defence Minister Rajnath Singh on Friday paid tribute to the 13 Air warriors and met with the families of the deceased Air-warriors and shared grief and heartfelt condolences with them. The Minister also met with Sandhya Tanwar and praised her for her courage.

Ashish and Sandhya got married in February 2018 and the latter joined the IAF last year. And, never would have she thought that they would be separated under such unfortunate circumstances.

Sandhya, who hails from Mathura in Uttar Pradesh, is an air traffic control officer posted at the Johrat airbase.