Naveen Patnaik supports the idea of ‘One Nation One Poll’ 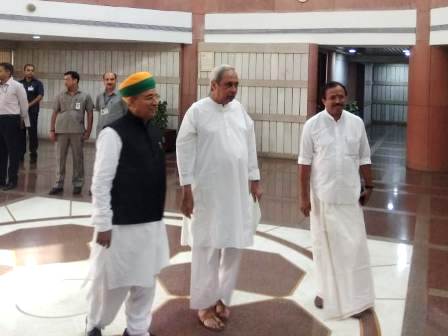 Nation First News:  At the all-party meeting of Presidents of all Political Parties, which was convened by PM Narendra Modi, BJD President and Odisha CM Naveen Patnaik fully supported the idea ‘One Nation One Poll’.

“Frequent elections affect the pace of development and also rock the spirit of cooperative federalism. BJD will fully support the idea of ‘One nation One election’. There has to be a give and take attitude in the larger interest of country,” said Naveen Patnaik.

Naveen also suggested inclusion of ‘Ahimsa’ or ‘non-violence’ in the Preamble of the Indian Constitution, as the country celebrates 150th Birth Anniversary of Mahatma Gandhi. “This will ensure that future generations not just of Indians but people around the world will be reminded of the profound truth of this principle,” he added.

The BJD President raised the ‘Women Empowerment’ pitch, saying “No country has ever progressed without empowering half of its population. BJD will extend complete support to Women’s reservation both in Lok Sabha and Assembly elections”.

On the issue of development of Aspirational Districts, he urged the Centre to focus on macro issues like Tele density, Banking network and Railway reach while leaving the micro issues to the State to focus with support from the Centre.

Naveen also sought a relook at the 2013 Land Acquisition laws, especially from the point of view of Railway and Road infrastructure development. In addition, he sought a relook into the Forest Conservation Act, saying Environment Protection and Economic Growth has to complement each other.

Among others, the CM stressed on the need to treat Central and State PSUs on an equal footing for statutory requirements. He also urged the Centre to consider Natural Disasters as a criteria for Special Focus on States.

“Biju Janata Dal (BJD) has been always supportive of whatever is being done in the interest of country and its people, and we would continue to do so in future as well,” he said.

100-Word Edit: Modi, Naveen Bat For ‘One Nation One Poll’

Monsoon to hit Odisha within 2-3 Days