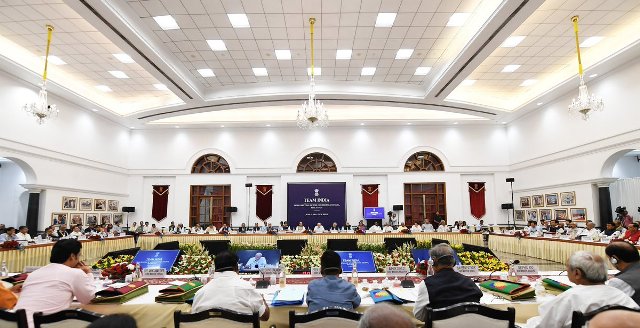 Nation First News: At the 5th Meeting of the Governing Council of NITI Aayog, Odisha Chief Minister Naveen Patnaik has sought special attention to States hit by natural calamities and raised the pitch for a ‘Special Category Status’ for Odisha in the wake of Cyclone Fani.

Naveen Patnaik informed the NITI Aayog that recent Cyclone Fani has caused massive devastation in Odisha. He has proposed that natural calamity should be included as a criteria to accord ‘Special Category Status’ to Odisha.

“As an interim measure, States hit by major natural calamities may be declared as ‘Special Focus States’ and granted benefits of Special Category Status for a specific period,” he proposed.

He also proposed the inclusion of landless agriculture households and sharecroppers in PM-KISAN, inclusion of all incomplete irrigation projects as on April 1, 2019 under Pradhan Mantri Krishi Sinchai Yojana (PMKSY), speeding up of railway projects (connectivity) to Kandhamal, Nabarangpur and Malkanigiri districts, extension of bank facilities to unbanked Gram Panchayats, implementation of Bharatnet project at a faster pace and revision of royalty of coal from 14% to 20% of the sale value.

Naveen Patnaik also batted for empowerment of women, simultaneous elections in the country, more focus on agriculture and scientific survey for beneficiary-oriented schemes.