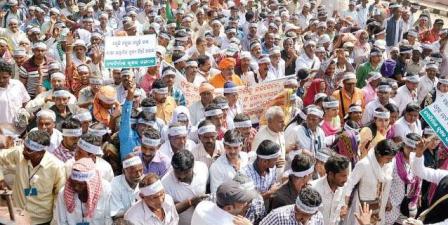 NF Bureau: The Naba Nirman Krushak Sangathan (NNKS) has vowed not to allow the EVMs and Polling parties in the villages of Odisha during the upcoming Assembly/Lok Sabha elections.

NNKS Convener Akshay Kumar said that the farmers would lie on the road to block the polling parties so that elections are not held to choose the leaders who care less about the farmers. “The political class has failed the farmers in the State. The Government has resorted to using force to suppress the sane voices of farmers. They don’t deserve to rule,” he said.

“We will resort to non-cooperation and civil disobedience to lodge our strong protests”, Akshay Kumar added, saying resolutions will be passed in all villages starting from tomorrow.