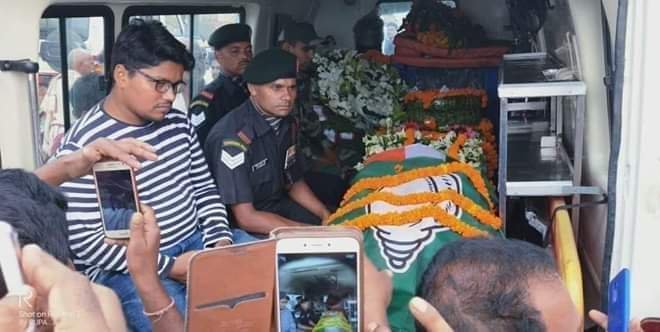 Nation First News:  The Biju Janata Dal (BJD) has taken strong exception to some people putting party flag on the coffin of Odia Veer Jawan Ajit Kumar Sahoo saying sacrifices of Jawans should not be politicised.

“The Biju Janata Dal has enormous respect towards the martyrs. The matter that has come to our notice is extremely unfortunate and we strongly condemn it. The party will find out who is responsible for this and take the stringest action against them. We again strongly condemn this extremely unfortunate incident,” said BJD Spokesperson Dr. Sasmit Patra.

Martyr Ajit Kumar Sahoo’s brother confirmed that some people put the BJD flag on the coffin, which was draped in Tricolour near Khuntuni, while felicitating the Jawan during the last journey.

When he noticed that, he immediately took it off. However, some people had already taken photographs and made it viral. He also urged people not to politicise the matter.

The Odisha Govt must order a probe into the incident to find the truth and identify people behind this act. Cops should ensure that such incidents are not repeated.