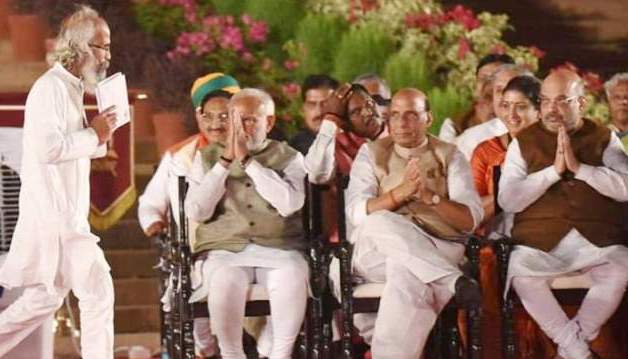 Nation First News:  Pratap Chandra Sarangi, popularly known as ‘Pratap Nana’, is loved by the masses for his selfless service, honesty and simplicity.

The 64-year-old Sarangi took oath as the Minister of State in the Modi Government on Thursday.

While his contestants used SUVs for campaigning, Sarangi campaigned in an auto-rickshaw for the Lok Sabha Elections 2019.

Pratap Chandra Sarangi had fought the 2009 Odisha Assembly elections from Nilagiri as an Independent candidate after losing his BJP ticket in a bus. He won and got elected to Assembly. However, he lost the 2014 Lok Sabha polls from Balasore.

Good orator, both in Odia and Sanskrit and an RSS ideologue, Sarangi commutes on a bicycle and has been living alone ever in a thatched house since his mother passed away.

While speaking to media persons, Sarangi said, there is severe shortage of potable water in Balasore and he will do his best to provide clean water to people of his constituency.

The parliamentarian believes that the Kuldiha Wildlife Sanctuary in the Balasore district, can provide jobs to the youth of the area and boost tourism.