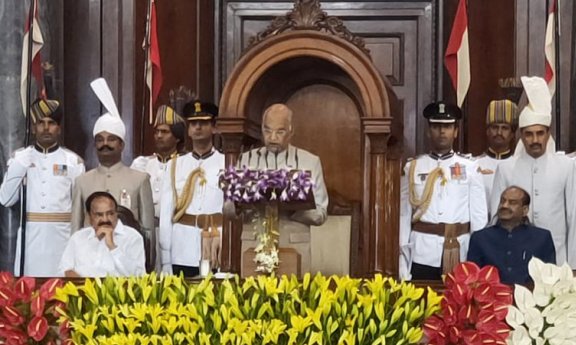 Nation First News:  President Ram Nath Kovind has addressed the joint sitting of both houses of Parliament in the Central Hall today.

During the address, the President congratulated the newly elected MPs and entire team of the Election Commission for successful completion of the world’s largest election.

He further stated that declaration of Masood Azhar as the global terrorist proves India’s standing in the world forum. All MPs must consider one nation,one poll proposal, said President Kovind.

Addressing the joint session of both houses the President said under the ‘Namami Gange’ scheme, the Central Government will further accelerate the campaign for closure of drains releasing effluents in the river Ganga. On the lines of river Ganga, the Government will also endeavour to clean up other rivers such as Kaveri, Periyar, Narmada, Yamuna, Mahanadi and Godavari.

• Pension coverage for farmers under Pradhan Mantri Kisan Samman Nidhi
• Rs. 90,000 crore farmer income support every year
• Under the ‘Direct Benefit Transfer’, funds from more than 400 schemes are being directly credited into the accounts of beneficiaries. During the last five years, Rs 7,30,000 crore have been transferred through DBT.
• Namami Gange like Projects for Kaveri, Periyar, Narmada, Yamuna, Mahanadi and Godavari
• Scholarship under the ‘National Defence Fund’ for the children of brave soldiers
• 26 lakh poor patients have benefitted from Ayushman Bharat scheme, 1.5 wellness centres likely to function by 2022
• India have to set the target of launching 50,00 startups by 2024
• Will increase seats in higher educational institutes by 50% by 2024, will create 2 crore more seats
• Will work to abolish Triple Talaq, nikah halala for the empowerment of women
• Efforts to further simplify GST will continue
• Eklavya Schools are being established for tribal students
• Govt will work to make its policy of anti-corruption; Implementation of Lokpal will ensure transparency
• e-vehicles ecosystem is being given a major push
• India will receive its first Rafale and Apache jets in the near future
• Government targets to make India’s economy worth $5 trillion by 2024
• Working to send first Indian to space. Mission Shakti has added a new chapter in India’s space achievements