The prime minister said Quad is moving forward with a constructive agenda for the Indo-Pacific that will further enhance its image as a "force for good". 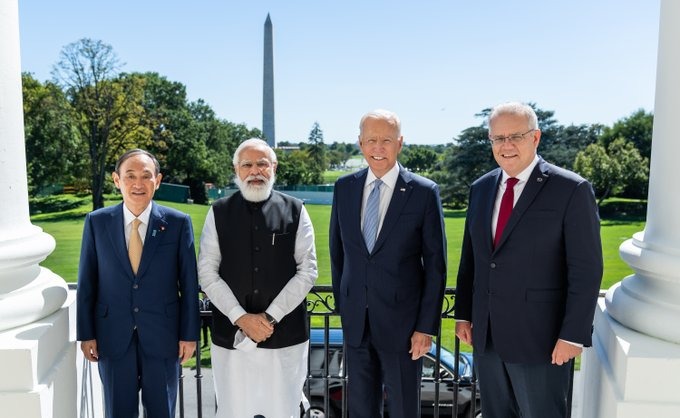 Nation First News: The mutual trust and determination among Quad member countries is re-energizing democratic forces and promoting a free, open and inclusive Indo-Pacific, Prime Minister Narendra Modi said here on Tuesday at the four-nation grouping’s second in-person summit. The prime minister said Quad is moving forward with a constructive agenda for the Indo-Pacific that will further enhance its image as a “force for good”. Modi made the remarks in the presence of US President Joe Biden, Japanese Prime Minister Fumio Kishida and newly elected Australian Prime Minister Anthony Albanese. In his opening remarks at the summit, Prime Minister Modi said the quad had taken a significant place on the world stage in a short period of time.

The meeting is set to focus on various initiatives launched by the four-nation grouping – US, India, Japan and Australia – and discuss developments in the Indo-Pacific region. Alongside Modi, U.S. President Joe Biden, Japanese Prime Minister Fumio Kishida and Australian Prime Minister-elect Anthony Albanese will attend the Quad Summit in Tokyo on May 24.

Modi, who is visiting Tokyo at the invitation of his Japanese counterpart Fumio Kishida, will hold separate bilateral meetings with Biden, Kishida and Albanese on the sidelines of the summit. He hosted Kishida for the 14th Annual India-Japan Summit in March 2022.

➡️ A day after the “defending Taiwan by force” comment, Biden says no change in policy of strategic ambiguity.

➡️Indo-Pacific Quad Grouping will be launched, Partnership for Maritime Domain Awareness (IPMDA) will enable tracking of “Dark Shipping” and connect India’s Information Fusion Center-Indian Ocean Region with other centers in the region.

➡️Leaders commended the Quad’s relations, reaffirmed their goals to create a “free and open Indo-Pacific” and mentioned a number of concerns expected to be discussed during the summit, including the Ukraine conflict, climate change action and providing economic support to the Pacific.

➡️Quad has made an important place for itself in the world in such a short time. Today, the scope of Quad has become extensive, its form effective. Our mutual trust and determination bring new life and strength to democratic forces: PM Modi at Quad Leaders’ Summit

➡️ Khadi used to be a costume for the politicians, but today people want to wear Khadi, the Prime Minister proudly declared Khadi being popular worldwide.

➡️ At the closed-door meeting, Quad leaders praise India’s handling of Covid-19 ‘in a democratic manner’.

➡️ On Tuesday, India along with 12 other Indo-Pacific nations, pledged to promote free and fair trade to boost investment and achieve sustainable economic growth.