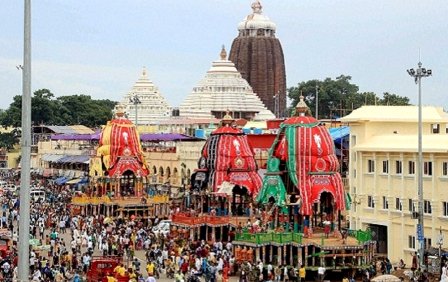 A day before Ratha Jatra, the chariots of Holy Trinity Lord Balabhadra, Lord Jagannath and Devi Subhadra was pulled from Ratha Khala and parked in front of Singhadwara today after ‘Agyan Mala’ ritual conducted by Pujapanda servitors of Puri Srimandir.

It is expected that lakhs of devotees would congregate in the pilgrim town to witness the world famous chariot festival tomorrow.

The ‘pahandi’ of deities or Gundicha Jatra will begin at 9 am on July 4 while the chhera pahanra rituals by Gajapati King will be conducted between 2.00 pm and 3.00 pm. Similarly, the chariot pulling will begin at 4:00 pm.

Similarly, Bahuda Jatra will be held on July 12 and the Sunabesha of trinity will be conducted on July 13. Niladri Bije of deities will be completed by 4.00 pm on July 15.

Tight security arrangements have been put in place to ensure smooth conduct of Ratha Jatra in Puri.