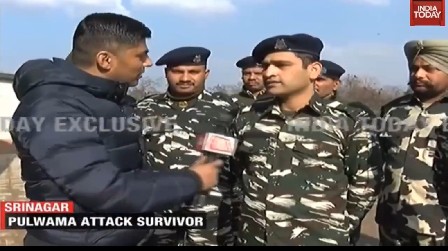 NF Bureau: While talking to Gaurav Sawant, Executive Editor of India Today TV, who has been reporting from the Ground Zero in Kashmir, a survivor CRPF Jawan of Pulwama attack, revealed that locals pelted stones at their convoy just 10 minutes before the suicide blast took place and continued it even after the blasts.

“While our convoy was passing through, locals were seen shutting down their shops. Some of them even pelted stones at our convoy. We kept moving. But, suddenly there was a massive blast. We were blinded, could not hear anything. Then, we came out and saw the horror. Stone pelting was still going on even after the blast. We provided protective cordon to our injured colleagues and took them to safety,” the Jawan, who also hails from Kashmir, narrated the incident.

“We are not scared, we are angry. We want revenge,” he said.

There have been several instances of stone pelting during Army’s operations against the terrorists. But, it came as a shocker that locals could pelt stones even after the terrible tragedy that blew 40 Jawans into pieces.