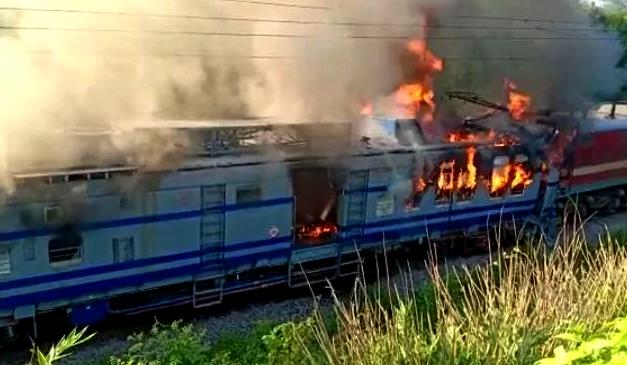 Nation First News:  In yet another railway accident in Odisha, the engine of Howrah-Jagadalpur Samaleshwari Express caught fire between Singapur Road and Keutaguda near Rayagada at about 4:30 pm today.

Three persons from Maintenance Department was killed after the train rammed into a Tower Car coming from opposite direction. Four people were reportedly inside the Maintenance Engine of the Tower Car.

The engine of 18005 Samaleshwari Express caught fire following which the front guard-cum-luggage van and one general second class coach derailed. Station Masters of Singapur Road and Keutaguda have been placed under suspension.

As per initial reports, maintenance work was going on when the incident took place. Reportedly, all passengers are safe and were shifted to other coaches. Senior officials have rushed to the spot to take stock of the situation.

Samaleshwari Express to be taken back to Rayagada by another engine.