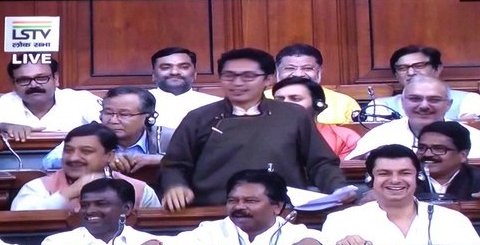 Nation First News:  Speaking on the scrapping of Article 370 from Jammu and Kashmir, a young lawmaker of the BJP from Ladakh Jamyang Tsering Namgyal made a passionate speech in the Lok Sabha on Tuesday.

During the debate, the Ladakh Lok Sabha member said that for the first time, the aspirations and sentiments of Ladakh are being heard.

Criticising the opposition parties, the MP asserting that the only impact after revocation of Article 370 will be on ‘two families’ who would lose their livelihood.

Namgyal narrated about the rampant discrimination against Ladakh and how Ladakh has been fighting for an Union Territory status for the last 71 years.