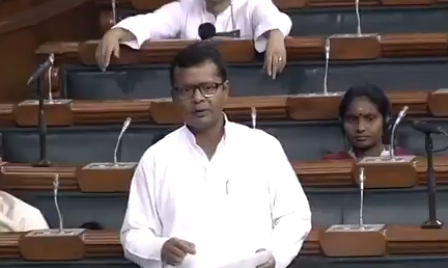 Nation First News:  Congress MP from Koraput, Saptagiri Ulaka has raised the Samaleshwari Express derailment in Lok Sabha, saying the Railways have failed to fix accountability despite repeated cases of derailments and mishaps.

At least 3 Railway maintenance staff were killed when the Howrah-Jagdalpur Samaleshwari Express hit a Tower Car, which was engaged in maintenance. The incident occurred between Singapur Road and Keutaguda near Rayagada on June 25.

Saptagiri drew attention to the fact that at least 39 people were killed and 54 injured when the Hirakhand Express derailed in the same route in January 2017. Despite the promises made by Modi Govt, hardly anything changed since then, he alleged.

“Only high-level review meetings won’t change things. Accountability must be fixed. The Railway Minister must give a statement in the House on the issue of railway safety and assure the Nation,” added Saptagiri Ulaka.