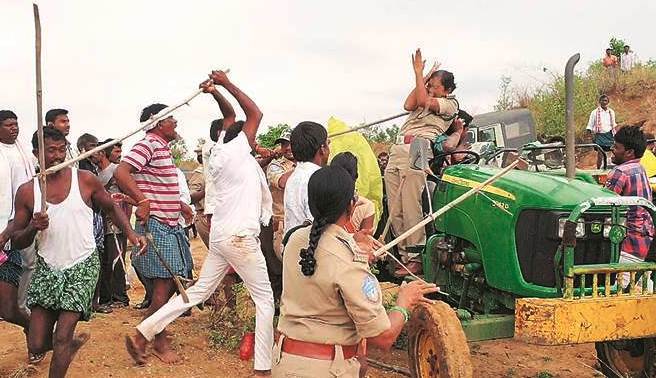 Nation First News:  In yet another shocking incident of violence on Government employees, a woman Forest Range Officer (FRO) was seriously assaulted with a stick by TRS MLA and workers in Telangana.

Reportedly, the forest range officer C. Anitha was attacked when she went to Sarasala village in Sirpur Mandal on Sunday morning with some officials to plant saplings as part of the Government’s ‘Haritha Haram’ green initiative programme.

However, some villagers objected the plantation drive, claiming ownership of the land.

Later they informed Koneru Krishna Rao the brother of Telangana Rashtra Samiti’s (TRS) sitting Sirpur MLA Koneru Konappa who arrived with his supporters and allegedly started attacking the forest staff and brutally assaulted FRO Anitha with a stick, hitting her several times on the head. As a result she suffered head injuries.

Hours after the video footage of the incident went viral, Rao was taken into custody along with 15 other supporters. He was recently elected as vice-chairman of Komaram Bheem Asifabad Zilla Parishad.