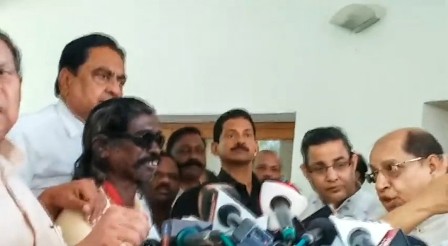 NF Bureau: The Enadu India Odia has posted a video on YouTube, which was captured ahead of CM Naveen Patnaik’s media byte on Sunday. The video shows veteran BJD leader from Western Odisha, and Rajya Sabha MP AU Singhdeo failed recognise the renowned Poet and Padma Shri Haldhar Nag and queried about his identity.

“କିଏ ଇଟା”? “Who is he”, AU Singhdeo asked Rajya Sabha MP Prasanna Acharya, as the media focussed on the Poet. “He is Poet Haldhar Nag, Padma Shri”, Prasanna Acharya quipped. Prasanna also sought to introduce AU to Haldhar, saying “He is AU Singhdeo Saheb”. But, Haldhar smiled and said, “I know Sir”.

AU Singhdeo has drawn flak from all quarters for his inability to recognise such a renowned artist from Western Odisha despite being in public life (politics) for decades.