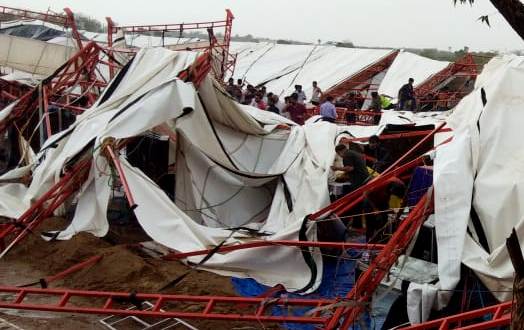 Nation First News:  At least 14 people were killed and around 50 others injured after a pandal collapsed and fell on them following heavy rain and thunderstorm during a religious programme in Barmer district of Rajasthan on Sunday.

As per report, people had gathered at the Rani Bhatiyani temple in Barmer for a “Ramayan Katha” when the tent collapsed because of strong winds.

Expressing grief over the incident, Rajasthan Chief Minister Ashok Gehlot announced Rs 5 lakh in ex-gratia to the kin of those who lost their lives and Rs 2 lakh for those injured.

The local authorities have been asked to probe the incident.