Debate on impact of Baijayant Panda’s entry into BJP 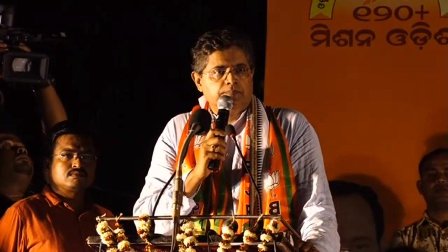 NF Bureau: After former BJD MP Baijayant ‘Jay’ Panda joined the BJP, there has been a debate whether his entry would help the party in Odisha or not. Will there be any big impact?

Here’s our Facebook Debate. Views expressed by you only.

Question: Will Baijayant Panda’s induction into BJP boost the party’s prospects in Odisha?

Vijaya Singh: Yes, will improve it to a very great extent.

Akshay Rout: Too little too late. May improve marginally.

Nirmal Panda: No chance. It won’t have any impact on the voters.

Priyadarshini Pati: No. He is not going to change anything.

Praduman Shah Deo: If he is declared the CM candidate from BJP, then it might make a difference in this election.

Laxminarayan Kanungo: From a recent survey by a regional channel, it seems so. But, I don’t have any first hand knowledge.

Suvendu Mohapatra: It’s vice-versa!! Without party, no one grows, same happens to party, as without strong leadership, the party gets stuck.The best example Modi Ji. Without Modi Ji, BJP would have not come to power with full majority. Jay Panda holds good credibility in Odisha politics. He will definitely bring spike in Odisha BJP’s count.

Dilip Kumar Joshi: First he is not a mass leader. Except Kendrapara, he has no hold. Few only know him as a leader. Further now, people of Odisha came to know that he tried to be in BJP for the last 22 years, which would go against him. Moreover, BJP has to prove its presence at the ground level. So, there is no value addition to the party as well as Mr. Panda’s fortune.

Janakish Badapanda: BJP’s fortune! How can any man’s induction change the fortune of any political party? BJP is a democratic, disciplined party, where talented leaders like Kharavela Swain, Bijoy Mohapatra, Dilip Ray and others could not find space for long. This party has a very long term planning, backed by a think tank. Yes, Jay Panda will be helpful to add one more seat for BJP in coastal Odisha.

Jagannath Satapathy: If we see recent developments carefully, had Mr Jay Panda been inducted two years earlier, especially sooon after the panchayat elections, things would have been different. However, the party can be strengthened. Mr. Panda would have got a chance to have say in candidate selection so that BJP can pose threat to BJD in most seats. It’s too late now. A few seats in Coastal Odisha along with an increase in vote share, could be possible. Regrettably, till date, the Dharmendra Pradhan and his loyal coterie have a free hand to operate by suppressing other talented people in the party. It’s a bitter truth.

Satyapriya Satapathy: B’J’P is a brilliant politician. He will win in his constituency and may get STEEL & MINES portfolio at centre.