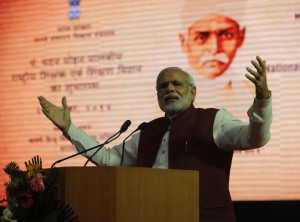 NF Bureau: This Debate will be remembered for getting an overwhelming response from the people. Yes, we have received the highest number of comments on this debate on Facebook.

Do you trust Narendra Modi & his Leadership? Does he deserve another chance?

Vijaya Singh: Yes I do. And, he deserves another chance and will get it.

Jagannath Satapathy: When you don’t have credible opposition, you must not use the wrong button in their favor. So, on Pan India mode, Modi still stands tall and deserves a second chance must to prove his mettle. Without providing sufficient time, you cannot expect a Rome to be built in a Single day. His intentions are undoubtedly good, but seems on implementation part, he unfortunately got wrong people to guide at wrong time. Still India shall believe him as a brave and dynamic leader. But after re-election, he must change his guards of responsibility like keeping away Jaitely and other arrogant leaders.

Punyasloka Mohanty: No alternative of Modi ji in this 2019 lok sabha election. Again Modi ji will form the Government and he deserves properly in right direction as a PM.

Simanchala Mishra: Change of Govt is an essence of democracy. But, people should find an alternative leadership. Whom shall people trust in the present scenario, if not Modi? Well,Pakistan and China will certainly be pleased if we change Modi.

M Srinibas Rao: Rather than him and his party can you suggest any other viable party, except Congress? Congress is power hungry, they will loot whatever remains in the country.

Satyanarayan Panda: Yes, there is no other alternative to this Leadership.

Janmejaya Mohapatra: Currently looking at the scenario, we need a decisive leadership… bold leadership..dynamic leadership…we need a nationalist govt. All this conditions can be satisfied by Modi led BJP Govt only.

Chira Chinmaya: No doubt about NAMO’s leadership.. Not only I, the whole world trusts him, and yes he deserves another chance..

Sanjay Kumar Pradhan: Yes, there is no alternative in India, His leadership takes India to the heights of Global Level never seen till now.

Sudhansu Sekhar Bal: 200% yes….because opposition is now in childhood stage…baby boy….so how could India trust a baby boy? So for a better and incredible India, only NaMo is the best.

Rajalaxmi Patra: Yes.. definitely Modi ji deserves another chance. He has proved his worth, a visionary, hardworking and a committed leader. Moreover opposition leadership is too weak before his persona.

Chittaranjan Tripathy: 1000 times yes. There are nobody compared to Modiji. In fact, Modi should get a chance for another 10 years with full majority in both houses so that he can do miracles that people expect from him.

Souranshu Prasad Sahoo: Something is better than nothing… there is no alternative to Modi. In the current political scenario, he is the best leader in terms of decision making, execution of decision, understanding the public sentiments, grass root implementation and development. His current tenure is much better than the previous ones as far as Economic growth, Home affairs, Defense, Foreign policy, Railway expansion and modernisation, Surface Transport and Inland waterways, Electrification, LPG distribution etc. While many key issues are being addressed, but there is more to be done in the sectors like Agriculture and farmers’ welfare, Social security benefits, Job creation in mass scale in MSME sector. Right now, there is no better alternative to Modi in the nation political field.

Ashirbad Mohanty: I wonder often when people says that he is the only person who deserve. It means there are nobody among 130 crores population to take leadership as because all others are useless? Was India weak and helpless before Modi came to power and the country would be vanished from the world map when his political career comes to an end? I feel shame for the people who heap praise on him despite knowing the truth of Gujarat riots. Law and order situation is deteriorating across the country; innocent people are being killed, women are being harassed. Unemployment is on the rise; business sector in a mess. GDP has gone down; price of domestic LPG increased, no control over essential commodities and services. Intellectuals are being targeted, not feeling safe in India. Constitution and Democracy under threat. Lots of problems remain unresolved. But, people blindly support him. What kind of nationalism is this?

Abhishek Mahananda: A big NO.

Dilip Lenka: It’s a yes yes and yes only.

Tusarkanta Satapathy: Criticising Congress step of making a retired CHIEF JUSTICE OF INDIA as RS M.P, present FINANCE MINISTER and leader of OPPOSITION in RAJYASABHA prior to 2014, Sri Arun Jaitely had said ” Pre-retirement decisions are meant for post retirement jobs.”. But just after his party BJP came to power, Another just retired CHIEF JUSTICE OF of INDIA was made Governor of a state. What’s the difference between BJP and Congress? Why another chance?

Arun Mohanty: Yes, of course. Modi must get one more chance…

Suchintan Rout: Yes we trust Modi Ji & his leadership. We should give him another chance.

Drajaya Panda: No. So many alternatives are there. Only if people stop wearing the dark glasses, they will see the world properly.

Suvendu Mohapatra: Absolutely. PM Modi has shown the world what a leader can do in just 4.7 years. He has shown the mirror to the parties that ruled the country for over 50 years, but did very little. India definitely needs Modi and just Modi.

Ramachandi Prasad Ranasingh: I trust, because I have not found any alternative leader right now. Let people decide…

Gajanan Mishra: Do you find any other one more energetic and powerful than Modiji?

Kailash Behera: For first question the answer will be yes for his own political party but no for the country because of his body language which doesn’t suit a PM. For the second question, it’s YES because there are no other choices.

Laxminarayan Pattnayak: Giving him another chance with full majority will definitely take us to anarchy and there will be no independence. Think before you vote for Modi. We don’t have alternative doesn’t mean we will choose a person who misleads and lies regularly.

Dipak Kumar Mahato: No one else is there.

Prakash Parija: Yes. I do believe him.

Nanda KIshore CHoudhury: Yes…. he deserves a second term for 2 most important facts.
1. No doubt, people say tha he spent a huge amount of money towards foreign visits, he made India recognisable in the world.
2. No other person deserves to become PM at least for now.