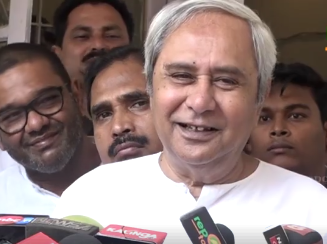 NF Bureau: After a debate on PM Narendra Modi and his leadership, we conducted another one on CM Naveen Patnaik on Facebook.

Do you trust Naveen Patnaik? Has he done enough for Odisha? Should he get another chance?

Asish Satpathy: 19 years are enough to make progress. If he couldn’t deliver within that time, there is no point giving him another chance.

Vijaya Singh: No need. He must retire.

Nayak Locanath: We should opt for new youth leader instead of the old one.

Suman Kumar Panda: No, time for him to retire and take rest. I believe him to be the CM of Bhubaneswar rather than Odisha.

Nrusingha Prasad Mohapatra: Any government does good work only in one or two terms. Later, they become dictators. Whether Modi or Naveen, there must be change after two terms. Naveen is not keeping well of late; he must retire.

Shrinibas Rout: Naveen Babu is going to be the CM 5th time for sure because of no promising leadership in opposition party in Odisha. Naveen Babu is secure at CM chair. Even though he couldn’t do what was possible, during the last 19 years, still no choice left with opposition parties. Lastly be it UPA or NDA, both need BJD support at times; so the stability of Naveen Babu is the responsibility of both central parties. Odisha people caste vote for simplicity of Naveen Babu, not development at all. We Odias are very much happy with whatever we get, like birth to death policies from BJD Govt.

Janakish Badapanda: Naveen has done enough, more than his capacity. Credit goes to his team of officers. Whatever he has done, are intended to muster votes only — never to take the people to further heights. His party should get a defeat, but he will be certainly get elected. World will see that Naveen will never sit as leader of opposition in the Assembly. He hates parliamentary democracy, Odia people and the political people. BJD may not come back to power.

Prabin K Padhy: It’s time for change. “Power corrupts and absolute power corrupts absolutely” has been the rule of the day in Odisha now.

Jagannath Satapathy: As far as trusting his personality, he is exceptional, but from Odisha’s growth point of view, a change of guard is the need of the hour, a rival party at the Centre is hurting Odisha’s interest. Secondly, a new face is required to taste a new flavour of administration, but would be interesting to see him as Leader of Opposition in Assembly, how he works, however it’s common public with majority will decide.

Sanjaya Kumar Mallick: Really it is the best time to change the government. But I think it can’t be. The people of orissa are not realizing what the truth is. In my opinion, in a democratic country a government should last maximum 10 years.

Akshay Rout: He should take rest. Government is running as Pratima Pooja

Abhin Adhikari: He is not a trustworthy leader ..not speaking Odia is his biggest strength as we Odias like outside product than whatever available inside. As per his 20 years of performance, he is not a capable CM having any vision for the state.

Krushnanjali Dash: NO.. He rather exploited the poor Odia people.

Prakash Parija: Honestly he has done good in some fields but failed in many fields. There should be a change.

Susmita Pradhan: Why not?

Suchintan Rout: No. Time for Change.

Rajashree Sharma: He should get more chances as he is focused & not corrupt.

Sujata Pattnaik: Yes he has done so many things. World knows Odisha because of him only.

Balkrishna Mohapatra: Of course, he should continue till his last breath. He is the most popular CM we have ever had.. He could have done better in his tenure in the state…but at the same time, more work should be done as long as he remains in power. I appreciate the things he has implemented or executed surrounded by corrupt colleagues.

Rajalaxmi Patra: Enough is enough. We no longer want him. Biju Patnaik’s greatest curse on Odisha is his younger son Naveen Patnaik. He is a poor shadow of his illustrious father.