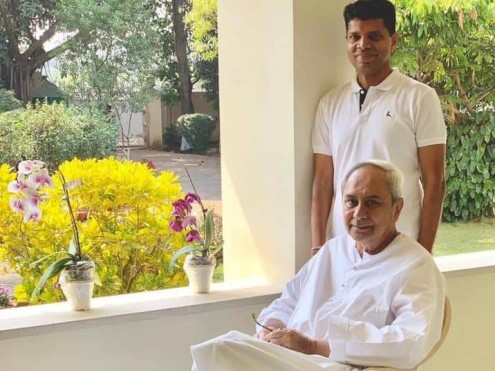 Nation First News:  A “rare photo” is doing the rounds on social media since morning. No, not by any Cyber Warriors. It’s not photoshopped either. Trolls are not doing it. It’s being done by BJD office bearers and some eminent personalities.

This is a photograph of CM Naveen Patnaik and his most trusted lieutenant & Private Secretary V Karthikeyan Pandian. Nobody knows when this photo was taken. It suddenly appeared and now taking the Social Media by storm.

After some initial reluctance (they were in a dillema), people are now sharing it widely on Facebook, Twitter & WhatsApp. The message is loud and clear. As the right hand man of CM, he has been managing key affairs. As the tweets say, he left no stones unturned to manage the affairs that led to the unprecedented success of Naveen Patnaik.

Call it a coincidence or planned, Naveen took the oath as the Chief Minister for the fifth term on May 29, Birthday of VK Pandian. Notwithstanding the allegations of interference in political affairs within the party, the entire campaign is aimed at giving him full credit for the governance model that has helped the BJD win elections.

Since the People have yet again reposed trust in Naveen & BJD by giving them a massive mandate in the Assembly with an increased vote share, Pandian definitely had the last laugh. Bouquets or brickbats, he takes it all.

A rare photo of Shri.Naveen Patnaik and Shri.V. Karthikeyan Pandian, the Statesman and his able General. The smiles epitomize a serene and heartfelt moment. Their Dedication, Determination and Devotion has transformed Odisha and it blessed Naveen Babu with a record fifth term. pic.twitter.com/KUUTTRYerz

A rare personal glimpse of a “private” moment!
The monk politician with his able right hand man! @Naveen_Odisha and Kartik Pandian. Bring on 5.0 #Odisha. pic.twitter.com/YEZyfLxDBA

Meet Kartik Pandian,Pvt Secy to CM, always stays behind the scene but lends all that’s needed to make CM function at his best. True work of a civil servant. 24×7 Working by sacrificing personal comfort & happiness is rare. A big cheers to the dedicated man behind the sage. Salute pic.twitter.com/4iGG5jgVV1

Resolute Fighters: CM @Naveen_Odisha with the camera-shy V Kartik Pandian. Naveen Babu is always extremely polite & courteous in his interactions with visitors. So is KP. They have never capitulated under intense & unrelenting pressure #Odisha pic.twitter.com/cFzDI5MGHL

Man of the moment @Naveen_Odisha with his man of the moment V K Pandian , A sharp, dynamic and politically astute Pandian was instrumental in #Naveen getting his #Fourth and #Fifth term as a @CMO_Odisha pic.twitter.com/3ax4mHv98j